In 2004 the social media network Hyves started in the Netherlands and became a big success with at one point in time 10 million subscribers (the Netherlands has a 17 million population).  In 2010 the Telegraaf Media Group (TMG)  took over the media network and added functionalities to it, with a focus on on line gaming. Recently the TMG announced to stop with the social media site and to restrict its activities to the on line gaming. But in the past almost ten years, users had added 1 Peta byte of content to the network. Would this be deleted like happened in other cases? No! Instead, Hyves offers a service to rescue the personal content: users can request via email a copy of their content (images, blogs, conversations etc.) and this will be send to them by the end of the year. Because, so Hyves says in the press release “this content is owned by the users”.

Very quickly after this announcement, another company MijnAlbum.nl offered a way for users to download their images from the Hyves site, even before Hyves will start their service. This immediately became a success, with 2 million downloads a day.

It seems that the awareness of both the general public and the service providers for the preservation of personal digital archives is growing, a good sign!

When I looked for this bibliography on 5-11-2013 I got this message. As the message is not shown any more, I assume the problem is solved. It would be interesting to know what happened and whether there had been loss of data. Only transparancy about these events can help making digital preservation more understandable.

According to their blog post, the Internet Archive Scanning Centre caught fire last week. Although no data were lost thanks to the procedures in place, this event will remind us that physical threats are still a risk for digital material. 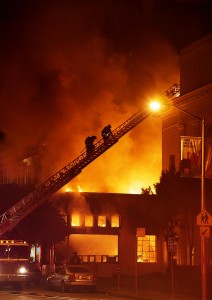